The third exhibit co-curated by myself and Candace Perry, Director of Collections at the Schwenkfelder Library and Heritage Center titled: “Garden to Table” will be displayed through March 1, 2015.  As I alluded to in the post Setting up an exhibit, the artifacts from the collection are a special glimpse into decorative skills the Schwenkfelders and their neighbors perfected.

There will be another post with the hooked and braided work intermingled with these pieces but I thought to show you creativity in making flowers and fruit from wax, wool, yarns, feathers, milkweed seeds, painted china, and paintings.

A popular craft for many women in Montgomery County in late 19th century was the making of wax fruit, and arranging the pieces under glass domes for parlor decorations. The Schwenkfelder Heritage Center has several of these arrangements including three that are from Schwenkfelder families, and one from the greater Philadelphia area.

The arrangements often contained vegetables, and sometimes other types of desserts and delicacies.

The making of wool flowers and assembling them in shadow boxes or under glass domes was yet another form of needlework that captured the imagination of local women in the late 19th century. Sometimes – and probably inaccurately – called plushwork, these flowers were constructed by wrapping wire shapes with wool and then matting or felting them. Instructions to make the flowers were available in Godey’s Ladies’ Book, the popular periodical of the mid-19th century. 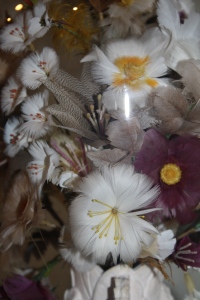 Domed Feather Arrangement
Making pictures, personal accessories, and arrangements such as this flower bouquet out of feathers became a popular craft for women in the mid-19th century. Exotic birds’ plumage would be used if available, but for the average American woman such as Lucina Schultz, chicken feathers would do quite well, and were sometimes painted and otherwise manipulated to achieve special effects.

Nature’s seeds were used by the PA Germans creating wreaths for the Holidays and small ornaments.  This image is a detail of a wreath composed entirely using milkweed seeds shaped as small flowers. The tedious work involved to build the depth is hard to imagine but the work fools viewers into thinking they are actual dried flowers. Placing it behind glass in an ornate gold frame raises the craft to a decorative art form. 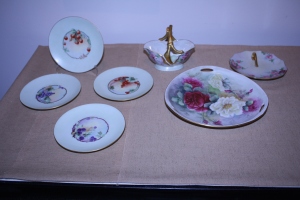 Amateur china painting became a popular Victorian ladies’ craft in the 1870s. Porcelain blanks made by Limoges in France and other factories in Europe were imported in huge numbers to supply the popular hobby. Some women even painted china to earn extra income.

Local china decorator Nora Krauss Schultz began creating her exquisite designs in the early 20th century and continued well into the 1950s, not only with her own work, but by passing on her knowledge to many local women in the communities of the Upper Perkiomen Valley. Nora Schultz’s talent for beautiful decoration can be seen in the group of plates decorated with berries on the left side of this case. 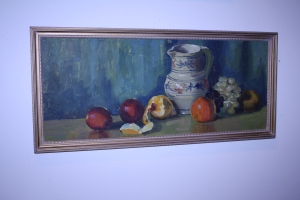 Sometimes china decorators applied their skills to the canvas, also; the paintings displayed above this case were painted by local women who also may have painted china.

Below are full views of the works detailed.

3 thoughts on “Garden to Table Treasures”