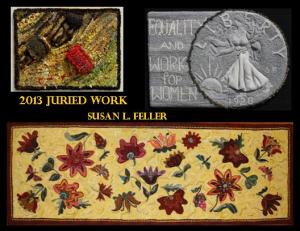 The studio has offered me organized space to work and explore.  Several pieces were submitted to different juried and invitational shows.

Haying Stages was accepted in 7Stitch shown at Morehead State College in Morehead, KY this summer.  It was a Surface Design exhibit and juried by the President Jane Dunnewold.  It was also accepted in the WV Div of Culture and History Biennial Juried Exhibition to be hung in the Dunn Building in Martinsburg, November 24- Feb 27, 2014.

Caraway Garden Runner was accepted along with Veins of Energy – Coal in the Best of West Virginia juried show at TAMARACK in Beckley, WV.