A trip of my lifetime began three years ago when the International Guild of Handhooking Rugmakers new board was announced to be based in Australia.  As Past-President of course I was going to attend the tri-ennial conference in the Fall of 2012.  My grandfather taught me to save for a goal and the envelope came out for just that… a trip halfway around the world!  Why not explore another country near the destination?  So New Zealand went on the list.  Internet searching made planning a breeze with Maps, and sites to explore from luxury of homebase.  A few emails and even one phone call to New Zealand confirmed all of the lodging and airplane legs.  And we discussed how to pack for two weeks in a carryon weighing no more than 7kg (15 pounds) and one suitcase.

Deb and Susan in transit

We arrived in Rotorua, one of the most active thermal regions in the world.  On our list to see were the mud pools, geothermal waters, and steamy volcanic forested areas.  The government of New Zealand wisely realized in the early 1900’s that deforestation without replanting would destroy the economy and ecology.  They mandate every tree which is cut must be replanted and the climate creates quick growth especially in the evergreens.  A REDWOOD forest was planted in that period and the trees have grown to hundreds of feet tall already.  Here the three of us are posing on a tree which fell but then sprouted several “limbs” as new trees. 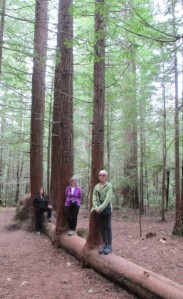 I decided to drink tea on the trip and found ordering “tea for two” was less expensive than two cups of tea.  Deb and I often shared a pot of English Breakfast. 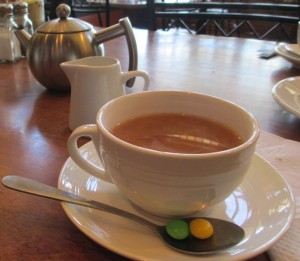 Tea at the Rotorua Museum Cafe

One observation is the cost of food either in supermarkets or at restaurants, cafes was higher than in the States until we realized there was NO TIPPING, for any service, taxi, guide, and certainly not waiters.  This does not stiffle service.  Our reaction to New Zealanders in general was friendly, helpful and welcoming; we were encouraged to return to visit the South Island (only one week of travel time), and given added advice before asking.  Tourism must be high on the economic impact list but I felt they all truly enjoyed living in New Zealand and being “Kiwis”.

There is a new envelope with a two dollar coin inside, beginning my return trip to New Zealand.