Two roosters are good for some things: breeding and two part harmony in the morning. 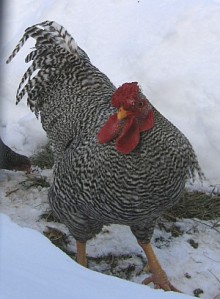 Bob #1 during the winter blizzard

But when Alpha male decides he is the king of the the roost (and the humans are considered part of that roost), something has to happen.  Sure enough even though Jim thought the crown of Bob #1, was better than Bob #2, we finally decided to add #1 to the freezer.  On April 22 the tenth rooster of the original Murray McMurray Dominques met his end.  He was the first one we successfully plucked (since he was midway through a molt) and weighed in at 5 pounds dressed.  The local farmers said that was a good size.

We noticed the very next day a new quiet and calm nature to the flock including protective BOB.  Glad he is happy we are too.  Now to await the hatching of the first (of three) nests and another generation of hens and roosters named…. BOB.  Wondering why all of our animals are named BOB? Makes for simple conversation, ease in culling the flock(they are all the same name) and we wont forget their name.